With my tickets all reserved already the trip to Interlaken in Switzerland was relatively straight forward, if very long. Barcelona -> Montpellier (France) -> Geneva (Switzerland) -> Bern -> Interlaken. I think I left around 9am, and got in to Interlaken around 8.30pm (As the game was playing)
Armed with a list of a few hostels I again set about finding myself a place to stay without having booked anywhere. My experience in Paris was stressful, mainly because I didn't have a good map. Interlaken was small enough and I'd made sure I had better maps :P The first hostel I tried came with great reviews, and the bar was absolutely packed for the game. Unfortunately they were booked out, so I wandered off to the next one, which did :) Annoyingly Switzerland still uses their own Swiss Francs (which is fair enough - Switzerland has a great financial history of being independent - how many movies mention this? :P) so I took a stab at what I'd need for 3 nights, which worked out to within 2 francs!
I was planning on going up to Gimmelwald in the alps, but the last cable car (which you need to get up there!) goes at 6pm, so a night in Interlaken it had to be.
I watched the remainder of the game, had some McDonalds because everywhere else was shut, got some sleep, then got up early (9am) to head on to Gimmelwald. Walking to the station the scenery was already amazing, and paraglider after paraglider kept landing in the field I was walking past.
Getting some picnic-y stuff from the co-op I got the train, then the bus, then finally the cable car up a sheer cliff to Gimmelwald. The scenery kept getting better. Mountains back home have NOTHING on the swiss alps. Cliff faces over a kilometer high, rushing creeks everywhere to be seen from the snow capped mountains yet to melt after what was apparently quite a long winter. 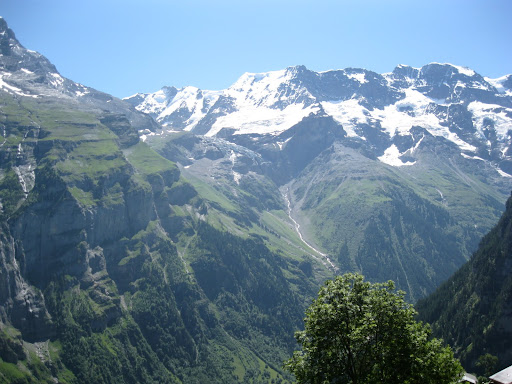 After a wander around the town, and a quick snack, I decided to try my luck at the local youth hostel. I had emailed them a couple of days ago but figured a walk in was worth a shot. My heart sank as I walked in - the receptionist was talking on the phone 'Sorry we're all booked out tonight.... Yes tomorrow too, sorry'. I asked anyway and she was like 'no we have 6 beds actually - we get a lot of walk ins, and just had a cancellation of a group of 4'.
I found this quite amusing, but I have got the picture that a lot of hostels have a similar principle and always save a couple of unreserved seats for the single stragglers without a booking. OK sure the hostel was full of about 60 high school kids from the states,but I could put up with that.
Happy to have somewhere to sleep I appreciated the scenery all the more, and took a quick snap from the patio to upload to facebook :P 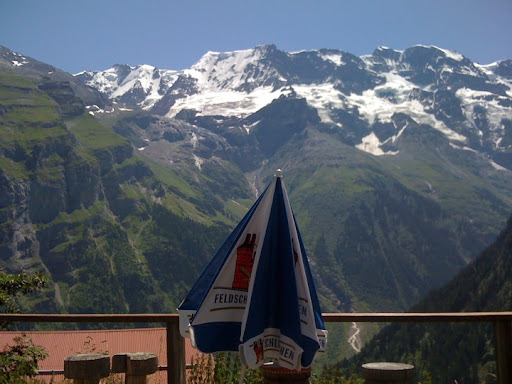 Gimmelwald has escaped development due to a supposedly bogus 'avalanche zone' classification - even though the nearby town of Murren has been significantly built up and is actually higher up the mountain. Lots of mountain huts, many hay barns, the occasional bed and breakfast 'pension' and a multitude of romantic little chalets. It's hay making season at the moment, with glorified lawnmowers and hay trucks not much bigger than a car scooting around the place. 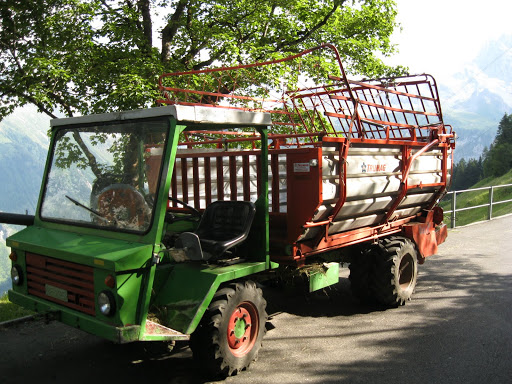 To get some supplies for my planned hike up the Scilthorn the next day, I headed to Murren and stocked up on some ham cheese tomatoes and pears. Unfortunately they were out of bread (reasonably priced bread at least), so I had to make a trip via Murren the next day anyway. The walk from Gimmelwald to Murren is advertised as 50 minutes. The walk back is advertised as 30. In reality it's about 20 each way, along a sealed track, dodging the occasional motorbike or hay truck. Down a few switchbacks and I was back at my hostel. Grabbed a pizza and a beer and sat outside to avoid the school children :P

And so hiking time. The map the hostel had given me said it was about 5 hours. The first sign I saw said 7. By Murren that was down to 5. It took me maybe 4 and a half. It took me a while to realize it, but I was actually walking up a ski run! They had barriers and stuff up to stop the wayward skiers from barreling over the edge. As I got higher there was still snow around! I hadn't expected to be going that high myself. Before long I actually had to walk through some, which my shoes weren't exactly designed for, but it was still mid 20s so the small amounts that did get in them dried out pretty quickly. 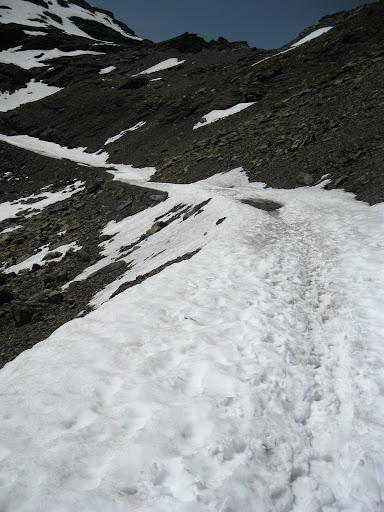 It turns out that the peak I thought I was climbing was actually hiding the one behind it which I *was* climbing. Up and up, beyond the tree line so it was just grass rocks snow and water. The path was well marked and eventually I came to the final leg - a narrow spit with sheer drops each side for about 30 meters and then up to the restaurant on the peak of the mountain.
The restaurant had been built as the cable car to the top of the mountain was finished in the 1960s, and is (or was? it wasn't clear) the highest revolving restaurant in the world, at just over 3000 metres. 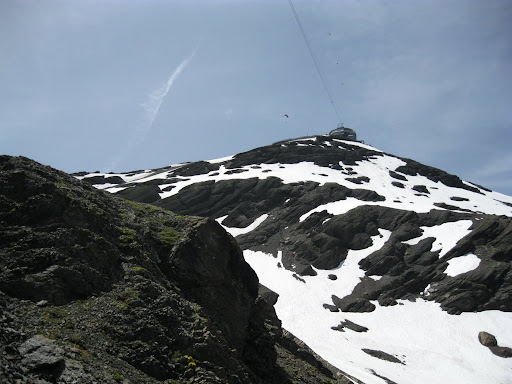 If it looks vaguely familiar you may have seen the James Bond movie "On Her Majesty's Secret Service" - where this restaurant was a major setting. The film was actually shot here before the restaurant opened to the public in 1969, and it was actually 'destroyed' in the movie. They have a room where at the press of a button you can watch sections from the movie which include the restaurant.
Having some more of my picnic I then started down, and followed a different sign, which actually had Gimmelwald on it, and a time of only 3 and a half hours! The path was much steeper, switchbacking across a grassy rocky hill, crossing a creek occasionally. This was obviously a less travelled track, narrower, and gown over with grass at times and flowers everywhere - not a ski run :P 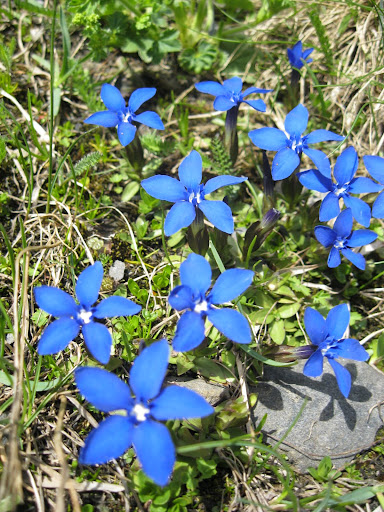 Getting near the bottom of the hill and I had two choices - Gimmelwald in 1 hour, or Gimmelwald in 1 hour and a half via 'Spruce' - which I vaguely remembered from conversation the previous night was a waterfall. Easy choice - and was rewarded by the track going behind and around an amazing waterfall hidden away in what is presumably a spruce forest :P

Coming out of the forest and there was Gimmelwald spread below me.
Turns out I'd missed the quicker route in the morning because I'd taken the 'shortcut' towards Murren. Given I needed bread anyway, and it led to a nice circuit rather than retracing my steps it worked out OK. But only 3 and a half hours back vs. the 5 or so on the way up.

Back at the hostel, and Lasagne time! I had judged my money well and after the lasagne had just enough swiss franc to pay for the bus and train back to Interlaken - but not enough for the cable car. I'd already decided to hike down from Gimmelwald to the bus stop anyway, and didn't find out just how close I was to this until I got to the bus stop at the bottom cable car station. It was a nice hour walk, past a whole lot of extremely high waterfalls - not as much water as Spruce, but falling 3 or more times the distance! When it joined up with the main creek the water was this strange bluish-white. 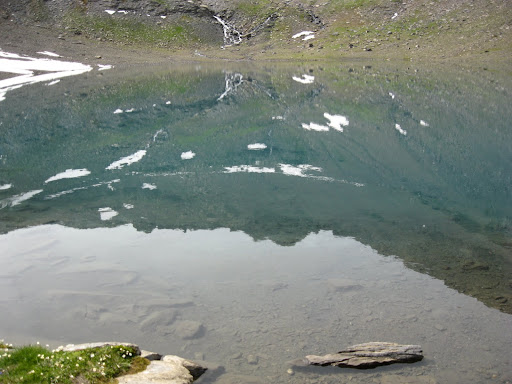 Not just from the rapids - I think the colour is also due to the fact it's molten snow. It was a very strange colour for water.

The previous night I'd looked up various routes to get to Munich from Interlaken - there was no direct train, and it really depended what time I got to places as to what as quicker. Getting to Interlaken and using the terminals there it turned out I only needed one change though. Going via a town called Karlshrue onwards to Munich I headed!