Can I have too many highlights in one trip? Regardless, Lisbon has to be added to the list. While sure the seat on the train there was absolutely terrible (who designs a seat where in normal sitting your head HAS to lean forward? And you're supposed to SLEEP in it??) the hostel was absolutely brilliant.
I got in to Lisbon at around 7.30am local time (got me confused for a bit as my watch said 8.30 and hadn't realised Portugal runs an hour behind Spain) and hopped on the metro (again so much better than Paris) to find my hostel. While I had booked it a while ago, I had got the dates wrong with the whole fiasco with trains from Paris to Madrid. I had emailed them to change it, but getting to the hostel at 8am to discover no answer at the doorbell.
After going for a wander and a short nap in the nearby park (and spotting some awesome graffitti) 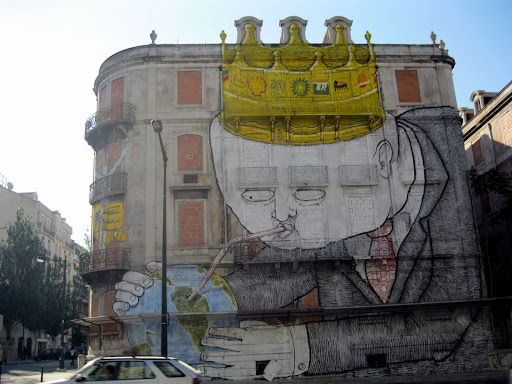 I came back around 9.30 to discover still no answer. So I rang the number and the woman said that it was fine about the date change and a guy would come in 15 minutes to check me in. Meanwhile someone finally answered the door bell and I was able to get into the hostel.

It turns out that besides a couple of hours a day to clean and check in / check out people, the hostel is basically left entirely to the guests. It was a single floor of a block, and only had about 24 beds. This made it awesome because you got to know everyone and so, 3 hours later when the guy to check me in actually did turn up (although he just let me keep the key I'd found on the bed, and said to pay later as he didn't have enough change - so it was all a bit redundant :P) a group of 9 of us decided to head on out to the beach.
After some eventful times trying to buy tickets - it seems half the city had the same idea - we ran into a guy who one of the girls had met previously. He had a few mates at the beach as well and suddenly we had a party :) Late afternoon someone had the smart idea to grab some beers from the shop on the beach and we were off. It was a little strange however - as in Spain people don't start drinking until late, so we were the only ones drinking. This was made obvious when it was my round and I go up and he knew I wanted 9 beers because of the bucket I was holding. He chucked in a 10th for free as well :)
After some genuine peri peri Portuguese chicken and some random guitar playing with a guy on the beach, we decided to head on into the city. The first bar we went to reminded me somewhat of Madrid as well - spilling out onto the streets.

I had some vodka strawberry drink - with real strawberries, however they didn't crush them at all, meaning it basically tasted of straight vodka. I endeavoured to remedy this by crushing them myself :D
The decision was then made to head to a club. Apparently it was walk-able distance so while the girls got a taxi, 4 of us guys headed off. Unfortunately for some silly reason it had been decided we knew how to get there even though we had no map and no local with us. I hadn't realised this and after 5 minutes of what must have been aimless wandering the decision was made to just go back to the hostel instead. At the time this somewhat annoyed me - I'd been someone working myself up for the whole night thing, to suddenly find it wasn't going to happen, and then we spent 30 minutes at some random food place which was obviously open 24 hours, when I would have just preferred to be going back home already if that's what we were doing. I realised I was being a bit irrational at the time but I couldn't help myself >.<
This feeling was compounded when we started heading back. The only one who knew where to go only knew a 'scenic route' and so we spent at least an hour, possibly two, having an impromptu tour of Lisbon. Again I should have just given up and enjoyed the sights, and I *did* take a few photos, but my mood was not the best. I think we gt back around 3am....time for bed. 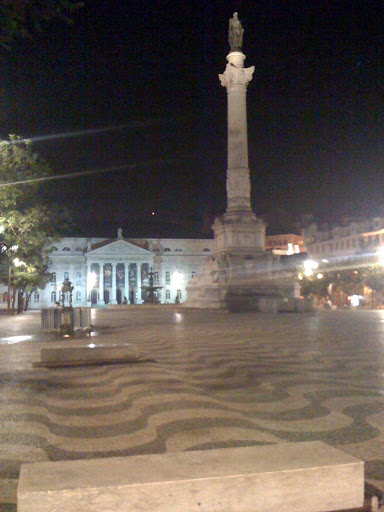 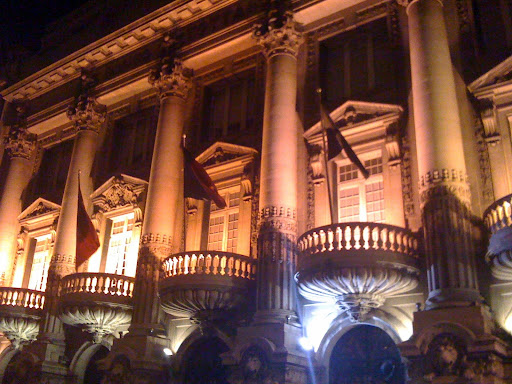 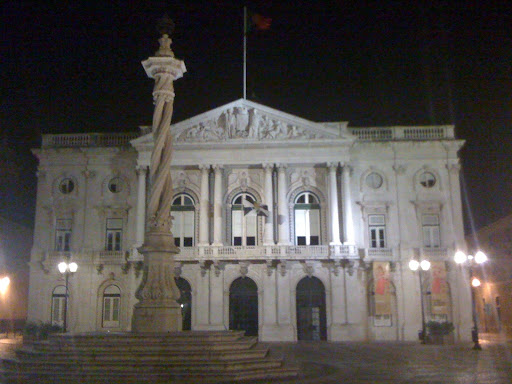 The next day began lazily. It was amusing just hanging around at the hostel and meeting the people coming in, in much the same manner as me, slightly bemused at the lack of reception and the fact that it didn't really seem to matter. A guy called Steve rocked up, he was sleeping below me, and we got to talking and he had somehow discovered that Midnight Juggernaughts, a band from back home, was playing in Lisbon that night at Lux, a local club. Being somewhat of a fan myself sounded like a great plan! First things first though, and late afternoon Steve (from Sydney), Will (a guy from Christchurch), Regina (a girl from near Munich...*****) and myself headed out on a self guided walking tour of Lisbon, towards the castle which dominates the south portion o the city.
Winding up through narrow streets and staircases was awesome, passing locals just chatting in the streets and finding a dead end to have to double back and find the next way up the hill. 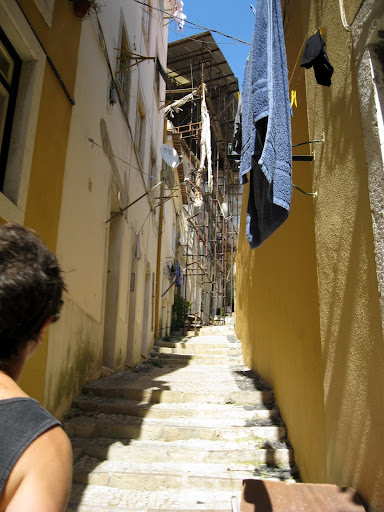 We managed to get a 'group' entry fee to the castle as there were four of us and wandered around taking photos as you do :) Besides the Tower of London, this was my first castle, and it was left essentially as is, where as Tower of London was someone tourist-ized (another made up word!) 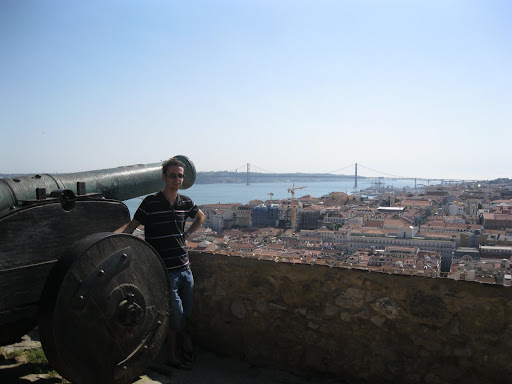 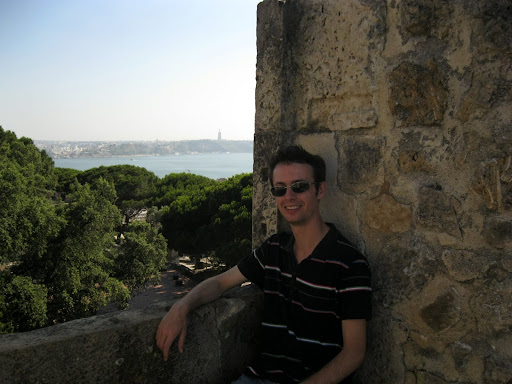 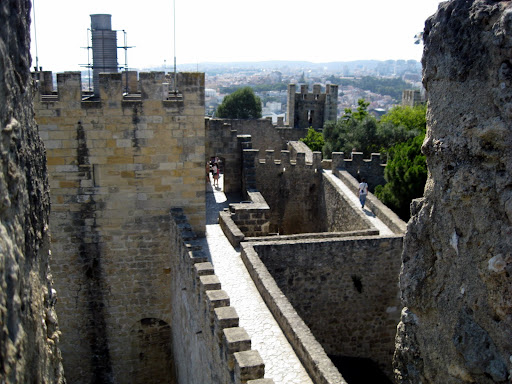 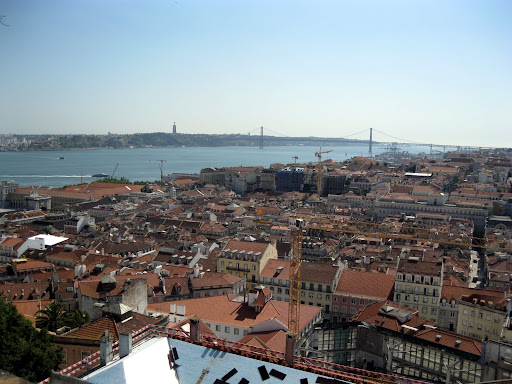 We took a scenic route back, through the older sections of the city, passing a few churches along the way, and this awesome narrow street with a tram, which came so close to the walls at times you had to press yourself against them to avoid being hit by it. Footpaths were rather narrow obviously, and the road is used just as frequently anyway. 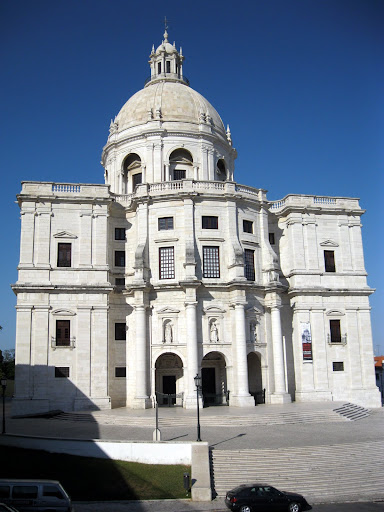 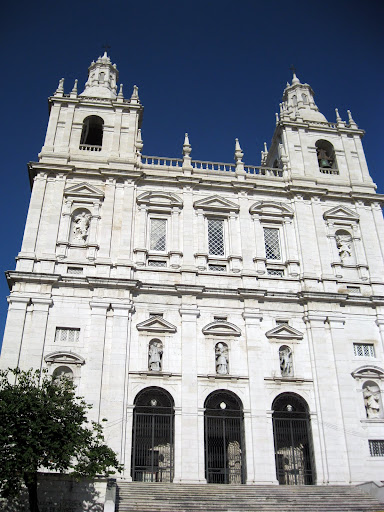 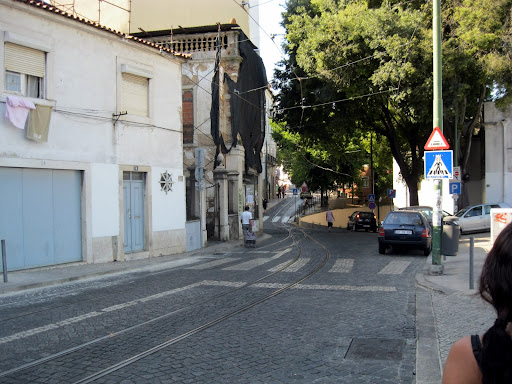 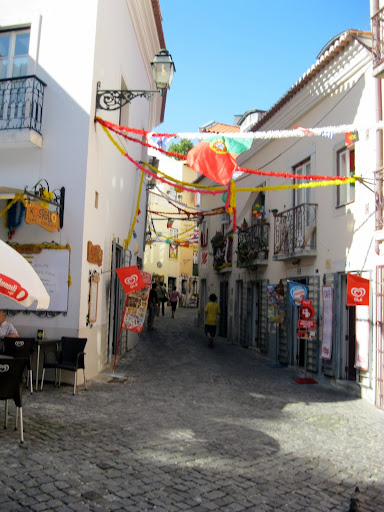 As we headed back we discussed dinner, and bought some meat from a random butcher along the way. The hostel had a recipe book with some traditional Portuguese dishes in it and after a quick perusal we decided on a bean dish and went to grab some ingredients from the supermarket, together with some fruit and wine for some Sangria. We all chipped in to help cook (and make Sangria :P ), and the kitchen filled up with others from the hostel. Of course there ended up being more than the 4 of us could eat and so it was shared around, and some other food was added. An awesome meal! Me and Steve also ended up recruiting the majority of the hostel to come with us to Midnight Juggernauts and a group of about 15 headed out on the Metro at 11 to Lux, a club right on the waterfront. We were worried we might have missed them, but figured that the late start to events in Spain and Portugal should hold true, and right we were - with about 30 minutes before they started when we arrived.
The stage they had was quite small and made it rather intimate - obviously being an Australian band, the majority of the crowd would not have known the music they all still seemed to be enjoying it. For their encore they pulled a random up from the crowd to play the drums which was quite amusing. 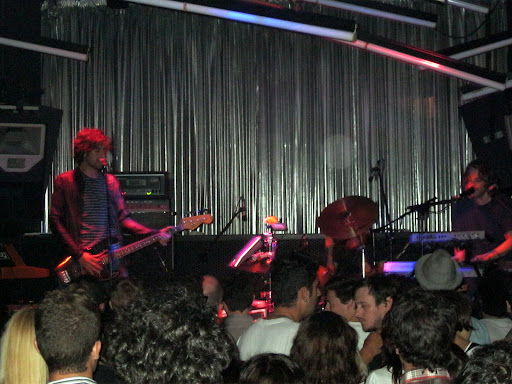 After they finished we headed up to the rooftop, and was quite surprised to find the band up there as well! I actually had a short conversation with the lead singer, and we had a group photo taken... although I have to wait until one of the Australian girls from the hostel uploads it to Facebook unfortunately. It's the kind of thing that simply wouldn't happen with them back home as they are too big of a name. (although not ridiculously so)
We then headed down the the club itself. It was somewhat of a new experience for me - DJs at clubs back home are generally just regurgitating well known songs, slightly altered but not much, and their mixing consists of changing the speeds until they match and fading. Sure you can get good ones occasionally - but it is rare, or it's at a festival. This one at Lux was great though - yes there were still hints of well known songs but most of it was original it seemed, and it made it all the better. 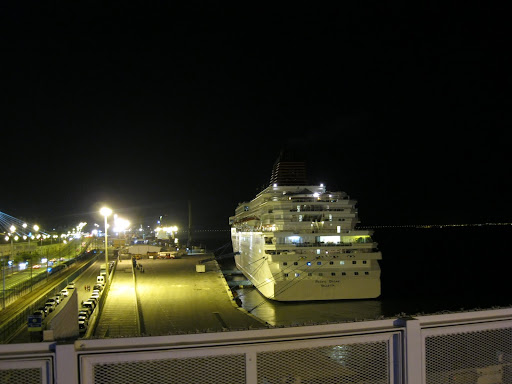 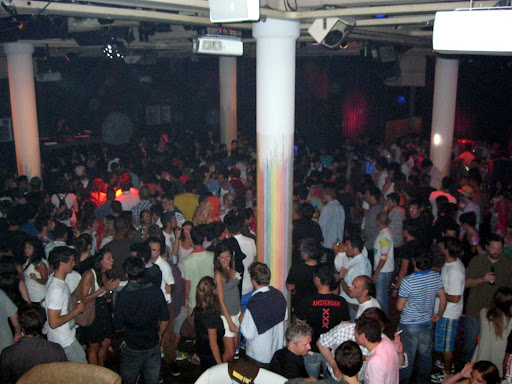 About 4am a consensus appeared to be reached, and we grabbed some taxi's back to the hostel. I wasn't to get much sleep, as I had to catch a train down to Lagos in the morning.