It turned out that Will, and a friend off his, Andrew, both from Christchurch, were also heading down there. They were cutting it fine with the train time though so I left before them to get to the station. At Tunes, where we had to change trains I did run into them again - turns out they had made it with about a minute to spare. Bit close for my liking. We arrived in Lagos and headed our separate ways however - they were going up to a festival out of town somewhat, I had booked a hostel in town. We were both heading for Barcelona on the same day as well, so it was possible we'd run into each other again.
It was clear immediately upon arrival this was a tourist town only. Walking from the station and there were booths everywhere promoting various water sports, or trips to the Grottoes. I found my hostel easily enough - it was a large affair, seemed to be condusive to group bookings, and as I discovered later that night - condusive to drunken parties.
For the day I headed back into town and found a nice little Indian restaurant and had an 'Indian Kebab' - basically curry on nahn bread - then found a bar to watch the football. I think it was the Holland game, but the one later that night - Uruguay v Ghana - stole the headlines.
Later in the afternoon I headed to the train station to book tickets to Barcelona. Amusingly I ran into Andrew and Will again, they were doing the same thing. We chatted and they left to go back to their festival, I found a supermarket for some frozen pizza.
With my cooked pizza I was lazy and watched the football at the hostel in the evening.
One BIG problem with the hostel was you had to pay for WiFi - this was new for me... I paid for a couple, but at 1 euro an hour it wasn't something I wanted to keep doing indefinitely. At some other hostels, hanging out in the common area surfing the internet was an OK way to meet people amusingly enough.
I was debating going to bed early (meaning midnight), but the 3 guys in my room - friends from Sydney - invited me down to the courtyard, and I had a couple of drinks there before heading out to a bar. Bars in Lagos.... wow. Firstly it seemed as though there were 10 on every street. Secondly - no security. Thirdly - beer bongs in a bar?! As we were walking there one of the guys said - 'we're finding you a girl tonight! got any condoms?' Gives you a bit of an idea... my reply 'Sorry mate, girl back home - you can have two for me.' For the three in my room (whose names I don't remember and don't really care) it seemed shots where the go. Three shots later and it was my round, yet somehow they had all disappeared. I found that a little strange - normally it's the reverse. I made a token effort to find them but I think they may have realised I wasn't quite down with Lagos's night scene - at least the parts of it I'd seen so far.
I have no issue with going to a bar and having a couple of drinks etc. But it seemed as thought he sole purpose of it was to pick up chicks / guys (depending on your preference) - not just to have fun. Their reply would no doubt have been 'but that IS fun'
Anyway, I headed back to the hostel, and never saw the guys while they were awake again.

I got up relatively early (omg 9am!) and grabbed some breakfast, then headed out for a walk. Lagos may not have a nightlife to my liking, but it certainly has a coastline! I wandered past countless beaches, and essentially climbed down cliffs to get to some more. 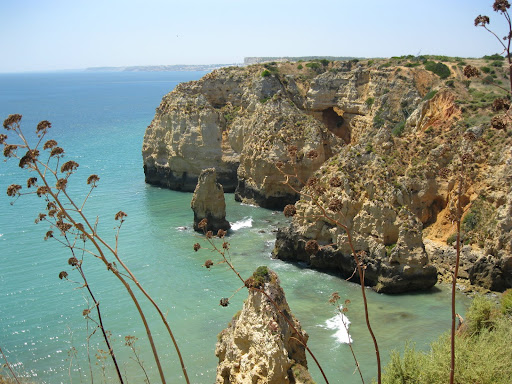 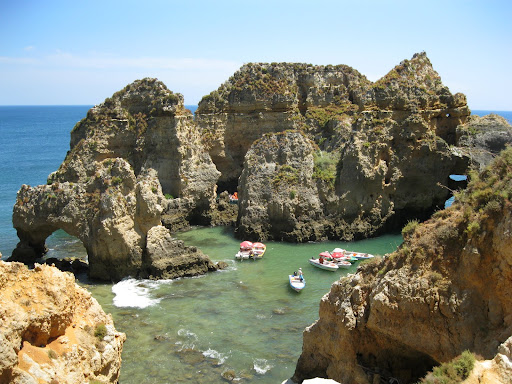 Annoyingly I had left my thongs back in Lisbon though... The best one I found involved the most cliff scrambling, getting to the bottom to discover it completely empty. Around to the left I found a few caves, and the tide was low enough, so I went in one and had a short nap... which turned into a longer nap for about an hour. 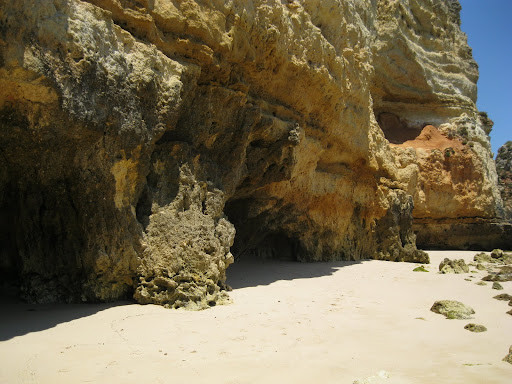 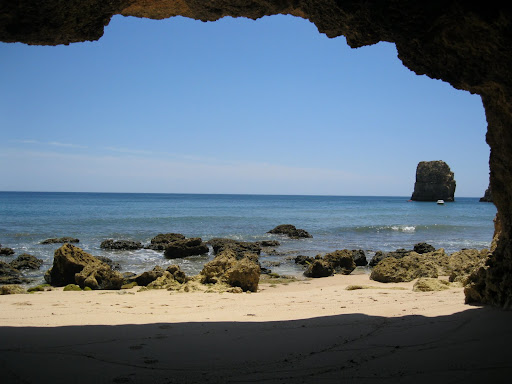 In that time only two more people turned up - a young couple in their canoe, who upon reaching the beach promptly undressed. Definitely more nudists here than back home I think. I did skip one beach when I saw at least 12 or so...
Unfortunately the peace at this one was ruined eventually by a small cruise ship turning up, which proceeded to play loud music and have someone sing happy birthday and run drinking games via a loudspeaker. I moved on. I made it far enough that I was back at a big beach again, and so found a café and grabbed some lunch. Of course the football was on there too, and I watched the first half of Germany v. Argentina. Silly me decided to keep walking at the end of the first half though, wish I had've stayed to watch the demolishing they gave them at the end. Ah well.
I took the inland shortcut back, intentionally getting somewhat lost, and in the process ran across what seems like a roller-blade time-trial. It was actually quite organised with a loudspeaker and everything. The track was a small obstacle course - and little Portuguese children were set up in pursuit fashion, racing around with parents cheering them on. It was somewhat unexpected - Lagos had seemed almost entirely made up of tourists until then.
Earlier in the day I had gone to pay for more wifi access and the receptionist let me in on a little 'secret' - that just down the road there is free wifi on the street. I wasn't able to find it in the morning, but on the way back I spotted it - a 'cultural centre' with a courtyard, which was just open to the public with free wifi. There was a bar but it didn't seem as though a purchase was needed to just hang out there. Not quite feeling the Lagos vibe, I spent the better part of the evening there, and did have a beer or two just to be polite :)
For dinner I took a recommendation from the little tourist map - and found a 5 euro meal that was full size. Great stuff, and I did talk to a few people, but decided in the end I'd get another early night, head to Lisbon earlier in the day and try and get my thongs back, instead of spending more time in a town I hadn't really enjoyed so far.