Madrid was significantly easier than Paris. Arrived in Chamartin, and BAM there's a metro map to pick up. Too easy.
Headed in to the station I needed for the hostel I had booked. I went on a limb with them - they had only 5 reviews and so were unrated. They had all the facilities though and I turned up there and apparently they had only opened a week ago!
The staff there were great however, offered me a map and to point out the various sites. There was a *little* bit of construction going on still, but nothing major. I had a great little 2 bed room for only 20 euros a night, and for two of those nights was actually alone! Prices were apparently cheaper to get the people in as it had just opened though.
After catching up with Bridget I headed out with a couple of Americans to watch the USA game at a very American bar. I got a hamburger with chips and the guy was a rather stereotypical US guy. While there we met up with a couple of Peurto or Costa Ricans (yeah I kept getting confused between them, which ever one is near the US) who one of the Americans had met in Barcelona who were now in Madrid. So after the game, to help drown their sorrows at losing we bought a few beers and went back the place the 'ricans were staying at. They attempted to teach us a rather confusing game that was a cross between 500 and hearts. You wanted to win the point cards, with aces worth 13, threes 12, sevens 11, and picture cards 10, and there is a trump suit.
We gave up after a while and headed out in search of a club. 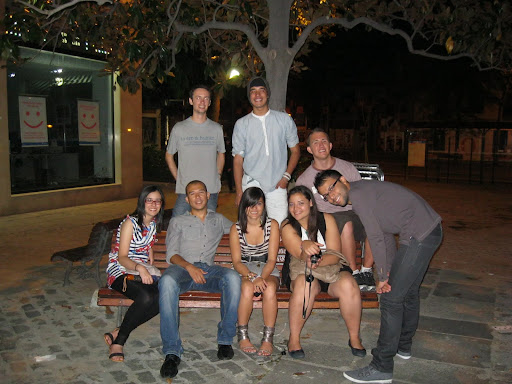 The first place we found was a dingy little bar on a corner. It certainly spilled out onto the streets :P 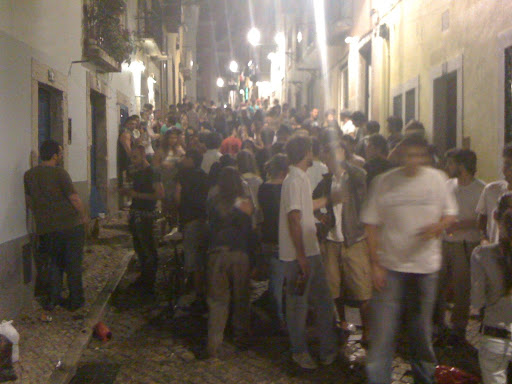 It did however have 5 euro pints of sangria. Yet their sangria consisted of red wine, ice, solo, coke and sugar. Not exactly entirely authentic. I think I only got through about half of it... gave the rest away and we headed out again via two metro stations and a taxi to another club. This one was an ACTUAL club, not a bar. We discovered fairly quickly it was actually a gay bar in the gay district. This seemed to horrify the americans but was not something new for me. There were still enough heterosexuals around the place to not be fighting the men off :P
The usual night life in Spain is eat dinner around 10pm. Get ready, have a couple of drinks, and go out at about 12. We succeeded in this. We even succeeded in the next bit - which is stay out until the Metro re opens in the morning at around 6am. Strangely enough I was still awake, and after some consultation with a local and a map, discovered that despite the convoluted path we'd taken the previous night we were only 10 minutes walk away from the hostel I was staying at. No metro for me! So I get back to the hostel around 6am and go to bed at 7 - why did I even pay for the first night at the hostel? :P
Better part of the next day wasted I eventually made it out to watch the England Germany game. It was a VERY entertaining game, and while England where denied that goal it probably wouldn't have changed the outcome. I do hope they do something about electronic detection of these things though. I wandered to the supermarket to get some crappy microwave food and bummed the night at the hostel.
The next day I decided to finally do something productive and headed on out to the Royal Palace. The receptionist recommended I visit the Egyptian temple nearby as well, however having just been to Egypt I wasn't all that keen :P Wandering past a few parks I came to the palace. 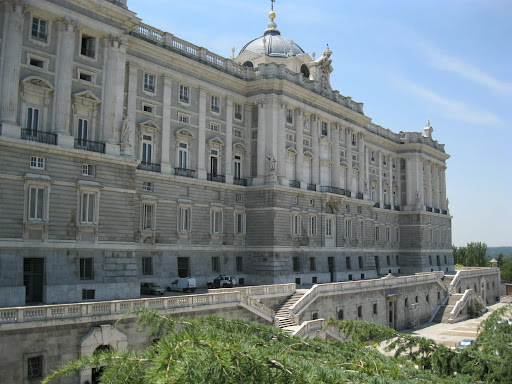 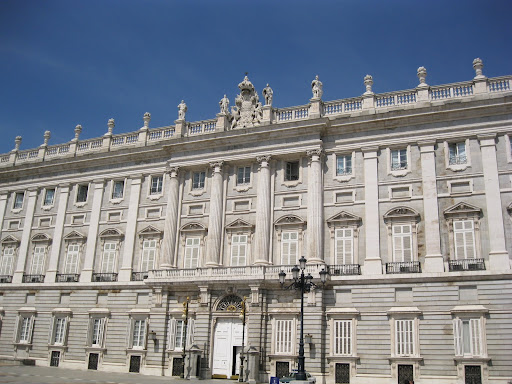 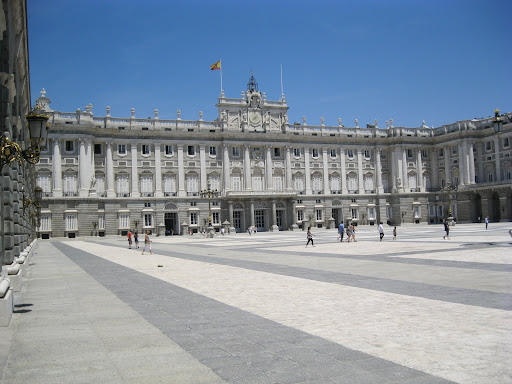 While not particularly massive or anything it was quite tastefully decorated and fit into it's surrounding gardens and grounds very nicely. After waiting 30 minutes to get in, the inside of the royal rooms was breathtaking. Unfortunately they recently changed their policy of no flash photography to no photography at all, so I couldn't get any pictures, but the amount of detail in every single room boggles the mind. Each room had it's entire ceiling painted, and was a masterpiece in it's own right. The furniture and furnishings everywhere had carvings and gilded edges or trappings. There wasn't a bare wall to be seen without it having some artwork somewhere, be it a vase, an embroidered couch, a clockwork statue or a polished mirror framed with gold. Some rooms even had themes. One in particular I liked was the porcelain room, with little porcelain figurines inlaid on the wall, with the joins and screws covered by plaster vines which traipsed around the entire room.
After all this the royal armoury kind of paled in comparison - however it had a similar collection to the tower of London's, but it was more complete and methodical, with entire sets with horses laid out in chronological order, which I believe the tower of London is aiming for eventually. Unfortunately the descriptions in the armoury were only in Spanish so I didn't get as much out of it as I would have hoped. The visit was well worth the 3 or so euro I paid with my 'student' card.

Palace explored I headed further afield and attempted to find entrance to the gardens to the west of the palace to get a shot similar to one of the post cards I had seen. With no obvious way in I headed north instead towards the Egyptian temple. A quick wander past it convinced me it wasn't worth seeing - a mere 3 meters high :P and I headed south again, this time further west and followed the fence line around until eventually I did find the entrance to the palace gardens.
These gardens where interesting, in that while there were pars of it which were clearly quite well tended, there were also parts left to go semi wild, which added quite a nice character to them. After getting my postcard shot (sort of, seeing as the fountains weren't going) 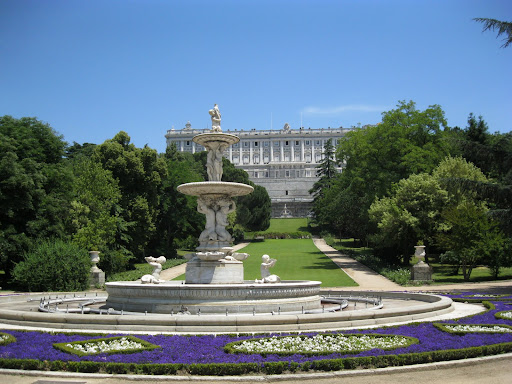 I continued wandering, and had a short siesta in a nice little shaded grove. 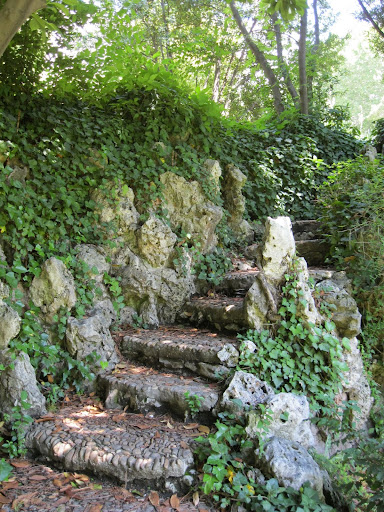 Then headed onwards continuing my own personal walking tour (seeing as Sandemans one was cancelled last year due to various reasons - specifically some tour guides didn't like them doing free tours and ended up assaulting two tourists who went on the tour!
Anyway, over the river to discover a rather strange artwork, then back up following a cable car from underneath, to find it heads to some amusement park. Not of interest to me I headed back to the hostel and had another lazy night, this time of microwave pizza.

My final day in Madrid.... needs to be filled in. If I can't remember I guess I just bummed at the hostel. What a waste :P

When I left to catch the train to Lisbon I had to walk as there was a train strike. Coincidentally (I think not) this was a day that Spain was playing Portugal in the world cup. My walking route slowly got more and more congested and I realised I was walking straight past the Madrid stadium, which had 4-5 big screens set up around it, and therefore a few thousand people as well, drinking their sangria. 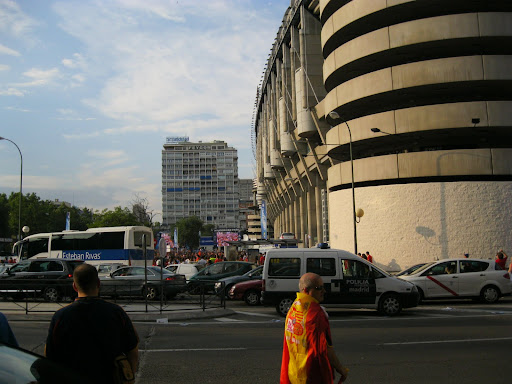 I decided to take a detour instead of shoving past them with my backpack and all. Got to the station in about 45 minutes and was able to watch the majority of the game there, on a crappy small screen but hey. 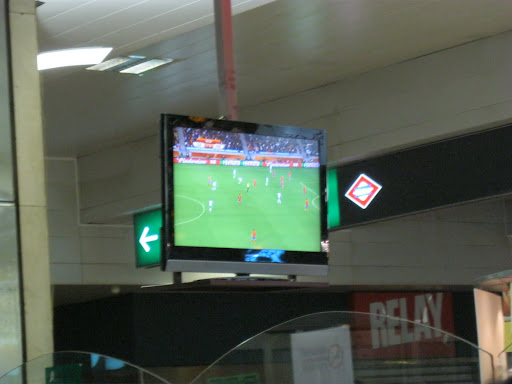 Wish I had have worn my rip off Liverpool top as it had Torres and #9 on it, which happens to be the same number he wears when he plays for Spain. Happily enough the game ended about 10 minutes before my train left, So I got on to one of the worst train seat yet...