Overnight buses are not so fun when the seats don't recline. I could probably have done with a travel pillow of sorts too, oh well. We also ended up waiting for an hour at one stop because our the new driver hadn't arrived. Nevertheless, we arrived in Edinburgh on time at 8.30am and I went in search of my hostel. In the process I had to walk over 'North Bridge' - and was immediately struck by how old Edinburgh seemed compared to London. Buildings everywhere were straight out of history books. I expected this somewhat of England, but besides landmarks the majority of it could have been as new as Melbourne. Edinburgh not so. I also got my first view of the castle.
The hostel - High Street Hostel (although not quite on High Street) was a very pleasant surprise after London. Although I was unable to check into my room until 3 that afternoon, I was able to use their facilities meanwhile. They actually had a kitchen! Quite a large well equipped one at that. Amusingly I never ended up using more than the microwave.
After catching up on my internets :P I headed out to find the Sandemans walking tour of Edinburgh. This company also runs tours of London, but as I mentioned I found a different one with a one on one guide there :P
Sandemans runs free tours of a lot of the major european cities, and after the Edinburgh one I will probably track them down where I can. While they are free, you are expected to tip the guide, but Troy (or Tory as his name badge said) took us on a great 3 hour trip around the 'old town'.
The old town is the part of Edinburgh which sits on a spit of land which was created when a volcano, since covered up, was 'hit' by a glacier, the hard rock of the volcano protected the land immediately behind it and so the volcano ended up with a tail. The volcano itself now hosts Edinburgh castle, and from the castle, down the spit, runs the Royal Mile. The Royal Mile, funnily enough, runs for a mile, down to a palace (name eludes me) where the Royal family stays when they are in Scotland.

The castle was covered in scaffolding for the Edinburgh Tattoo later in August.

We also were told of the story of Greyfriar's dog, who stayed by his owners tomb for years after he died.
The royal mile is also high street, which my hostel was just off.
Of course at the end of the walking tour, the guide promotes the various other (paid) tours which Sandeman's run. Among them is a ghost tour of Edinburgh, and a pub crawl. After grabbing lunch with a couple of the tour leaders and some of the tourees (I call it a word!) of which I ate only the mash due to continuing stomach issues, I headed back to the hostel to check in and to find out where the nearest doctor is to get a look at said stomach issues. 50 pounds later I had antibiotics in hand, and (after some subway) went back to the hostel.
The room itself at the hostel was also significantly better than London. 20 (i think) people in the room, but only double bunks, not triple, and a decently sized room, with partitions with 8 or so to each. The people were also more friendly, and had a chat with 3 Australian girls, one of which had her 21st birthday that day and so were heading out, and some American girls as well, one of which was headed out on the pub crawl by Sandemans. Seems the guys were all too busy to spend time at the hostel... Me, having a lack of sleep on the bus and on antibiotics went to sleep.
Next day (Tuesday) was a wandering day. First things first - headed to a pub to catch the New Zealand game. Had fun scaring everyone else in the pub when the 6 of us watching it (all cheering for NZ) cheered like crazy when we got an equalizer 3 minutes into extra time.
Wandering afterwards I came across Scott's Monument (although you can't really miss it) and found you could climb it for 3 pounds. I debated then thought what the hell - it looked like it went up a fair way and would have good views. I was right :P and the staircases up through the leg of the monument and then at the top were cramped and narrow, was quite interesting how they'd managed to build them into the thing.


Only room for maybe 20 people at top and having to squish past each other to get to the next side. It added to the experience for me :)
From the top I spied a nearby hill, with a couple of buildings and a park on top.

So after getting down I headed over there to what is apparently Edinburgh's first park. There were a couple of very random memorials and buildings on top of it. One which was a Parthenon had run out of money half way through. 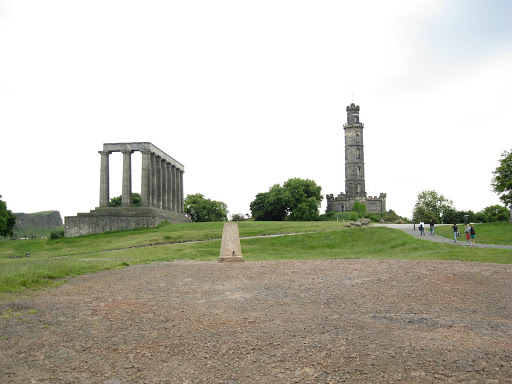 One was an observatory, another a simple memorial, but with a 'ball clock' on top - a ball which drops down during the day so ships at the harbour could know what time it is.
From there I also spied Arthur's seat, another volcano with a spit, but much taller.

No time today, filed it away for possibilities later :P
Later back at the hostel, after some research, discovered that the type of antibiotics I was on were (generally) OK with alcohol, and as Christina (the American girl who had been the previous night) was for some reason going on the pub crawl for a second night in a row, I decided to tag along. One of the best nights I've had so far - alcohol + tourists who know no one is a good combination it seems to produce extrovertedness (I will also claim this is a word :P ) 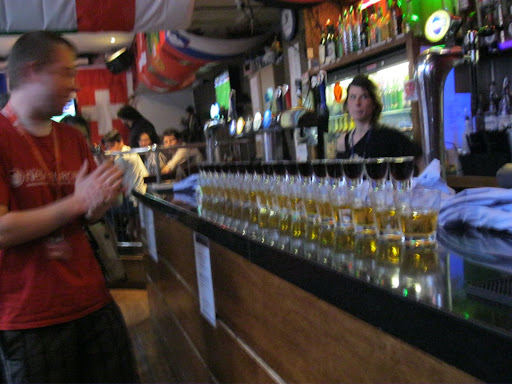 The pub crawl costed 12 pounds but included a few free drinks around the place, including Frankensteins which has shots out of test tubes and a real monster :P it ended at a bar with 1 pound basic spirits =D. Needless to say was a bit of a late night, although Wednesday wasn't a complete write off.
After chatting with Mum, apparently some of my Mum's mum's great (great great?) grandparents had been married at a church in Edinburgh and lived just near it. I found the church - Canongate Kirk, however it was shut, and a wander of the graveyard yielded no familiar names.

Also found Bull's Close, where they lived, however there was not a single door leading off this road :P


Thursday, my last day in Edinburgh. Checked out at 10, but was able to leave my bags at the hostel still. Did some internetting (yay more made up words) to make sure it *was* climbable (although I had already seen people up there) and headed off to Arthur's seat.


It was actually a rather easy climb, taking around an hour and I regretted not bringing some lunch with me to have at the top. Still worth it and I headed back down to find some foods. I then got a phonecall from the ferry company. Apparently they had had a fire on the ferry I was going to catch and I'd have to go to Poole of Weymouth instead. After confirming they would re-imburse me for the train ticket to get to them, I decided in Poole, as while Weymouth at 6am would have allowed me to watch the Australia game later that day... getting there at 6am could prove to be difficult.
While waiting around in the hostel that evening until my bus at 10, someone tried to convince me to go on the hostel's pub crawl, which runs every Thursday. "You can come for an hour or two and catch your bus afterwards!" No, I think that would be a bad idea... ate some food, caught my 9 hour bus trip back down to London...
Even now a week later, Edinburgh has been a massive highlight.