We're told Dahab is famous for the 'Blue Hole' - a shaft running down through the reefs near Dahab, literally only 10 meters offshore. Dahab itself was full of dives shops and snorkelling centres, and Hassaan organised a jeep for Carson, Madeline and myself to head on out there to snorkel it out. We left relatively early, around 9.30, and it was just as well - by midday there would have been well over 200 people in the water at any one time, snorkelers, scuba divers and swimmers.
The hole was reached by a short 10 metre pontoon from the shore which led straight to it's edge. The hole was about 100 meters across, with reefs surrounding it. The water over these reefs was less than a metre deep, but the hole itself we're told is over 100 metres deep, well out of the range of even scuba divers. At first I was somewhat disappointed with the reef itself,although the fish were numerous and varied, quite different to those found when snorkelling in Victoria. Closer inspection, and heading outside the hole to view the outer shelf of the reef yielded a much more interesting and varied reef structure. I had debated getting a disposable underwater camera for this, but had decided against it, and as we were leaving our bags in an open area in the restaurant, I didn't trust it enough to bring my own camera at all.
I had three 45 minute or so stints, each time getting out because despite being summer in Egypt, I still found the water a little chilly and we had no wetsuits. Was still well worth it, and was amusing to see over 50 snorkelers packed into such a small space as the hole later in the day. None of the action on the surface, and the multitude of scuba divers below us seemed to faze the fish though, they kept going on their merry way.
We ended up coming back around 2.30, and had a short nap. Seems I'm getting into the habit of siestas before I've even made it to the Mediterranean countries they are well known for. Late in the evening we wandered down the main street and went to a little Egyptian place, and managed to fill our table for less than 20 LE each. 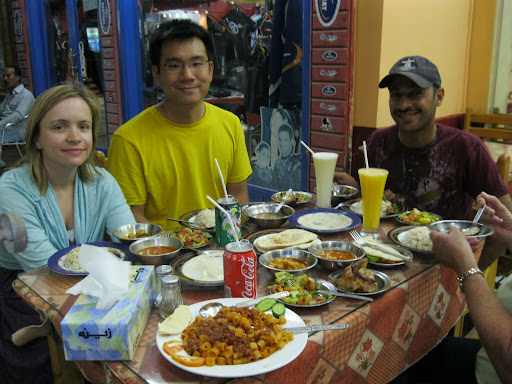 The contrast with just getting a local meal vs. a (somewhat westernised) restaurant meal is huge in price, yet (with the exception of my microwaved chicken on the way to St. Catherine) just as filling and just as tasty.
We then wandered down the market st, and on to the boulevard, and had more reminders of Lygon street with spruikers everywhere, not trying to get us to buy their stuff from the bazaar, but to eat at their restaurant. The westernisation of Dahab became very apparent, with even a few bars and pubs - something which doesn't exist anywhere else in Egypt as the majority of the population, being Muslim, don't drink.
Ended the night with a quick trip to the supermarket, grabbing some chips for the 7 hour drive the next day back to Cairo.