Up at 8.30 and had a dip in previously mentioned massive pool. Was a bit annoying though as turns out half of it is only 25-50cm deep, meaning you can't even swing your arms around to swim properly. Was still quite refreshing, and you dry out almost as soon as you get out due to the nice warm wind. Then after breakfast we were off to Dahab, Egypt's beach side resort and diving capital.
Driving in to Dahab it actually seemed quite small, it wasn't until the the next day driving along the coast to the north that I realized it's true size. Still our hotel was very nice, and I got a double room on the top floor all to myself, with a great little balcony with views of the beach literally 30 meters away. 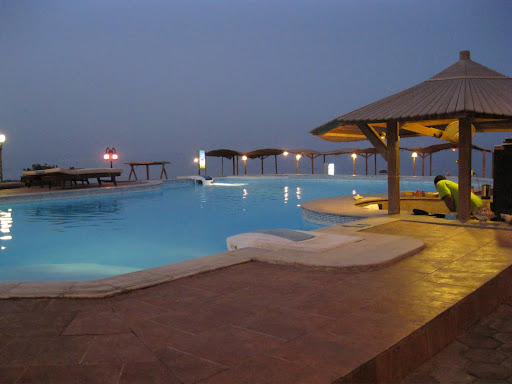 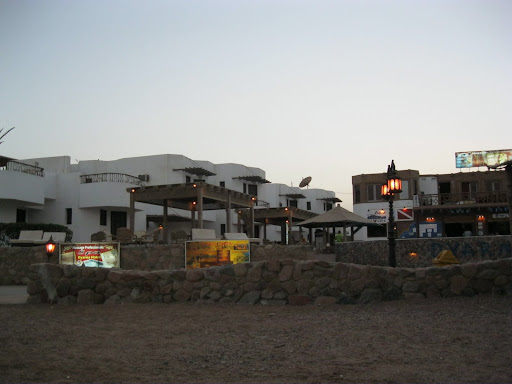 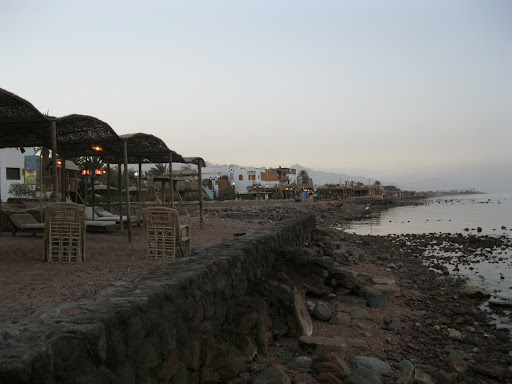 We discussed going snorkeling that afternoon (we got in around 1130) but decided to save it for a full day. The best thing about the hotel though? Free wifi! Dahab is frequented by a large number of tourists (although not so many this time of year) and also has quite a high European population. No doubt this has led to certain western 'necessities' such as internet being more readily available.
So, I lounged through the afternoon in the shade by the salt water pool, tapping away and getting photos and blogs done. Hassaan also showed me a few photos from his Facebook of some of his previous tours. Had a great cheap lunch down the main road at a little sandwich bar, getting another shawerma sandwich - also came with chips and salad for only 15 LE! 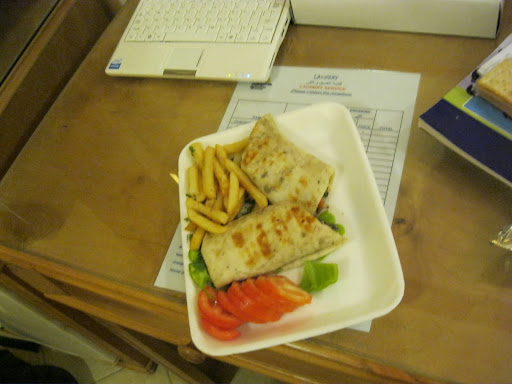 Later in the evening we wandered over as a group to 'Funny Mummy' - a restaurant recommended by Geckos and were talked in to having some fresh fish, literally caught only 2 hours previously. We picked out a White snapper and a red groper (I think it was groper he said at least) and they were taken away to be cooked. 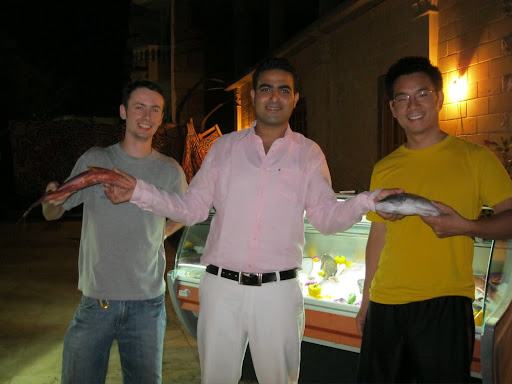 When they arrived the snapper actually looked quite vicious, with teeth and everything! 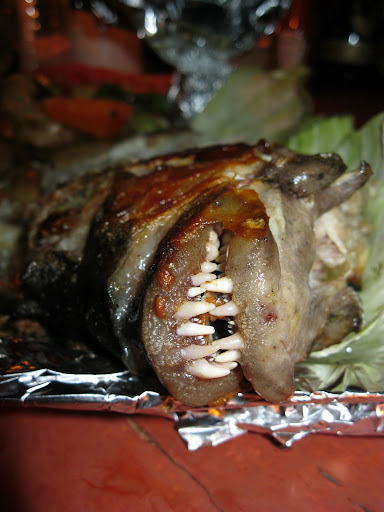 It tasted great, and we got free entrees, and when we went to leave they bought us free dessert to bring us back for another hour almost (even though we didn't buy any more drinks amusingly)!
One interesting experience at Funny Mummy was the cats. The tables where low and we only sat on cushions, and Dahab is apparently overrun with cats. The waiters gave most tables a spray bottle to keep them at bay as they climbed over everything and were very sneaky and hiding under tables to pounce on the best morsels. It was an amusing game of wack-a-mole until some of them were so wet they didn't really care any more and dived at the food anyway. Luckily most was saved, but it was a completely unique experience, although I guess it has similarities to protecting chips from the seagulls.
Also it seemed as though every restaurant along the beach front had shiesha pipes. Having seen the Lebanese restaurant on Lygon St in Melbourne this didn't seem overly out of place, but Christine hadn't seen them before, and had to try an apple one.
After al this we discovered when we went to pay there had been a misunderstanding and we thought the waiter had said 75 LE per fish, as opposed to 75 LE per person (4 of us shared it). Hassaan had understood the same as us, and while I would have paid it anyway, Hassaan being good friends with the waiter (he takes many groups there) we got it for 50 LE each. Worth every cent - and we had spent nearly 4 hours relaxing there!